Upon arrival you will be received by our guide who will help you settle into your comfortable car and will be heading to capital city Thimphu.

Check into the hotel. After your lunch visit the following sightseeing. 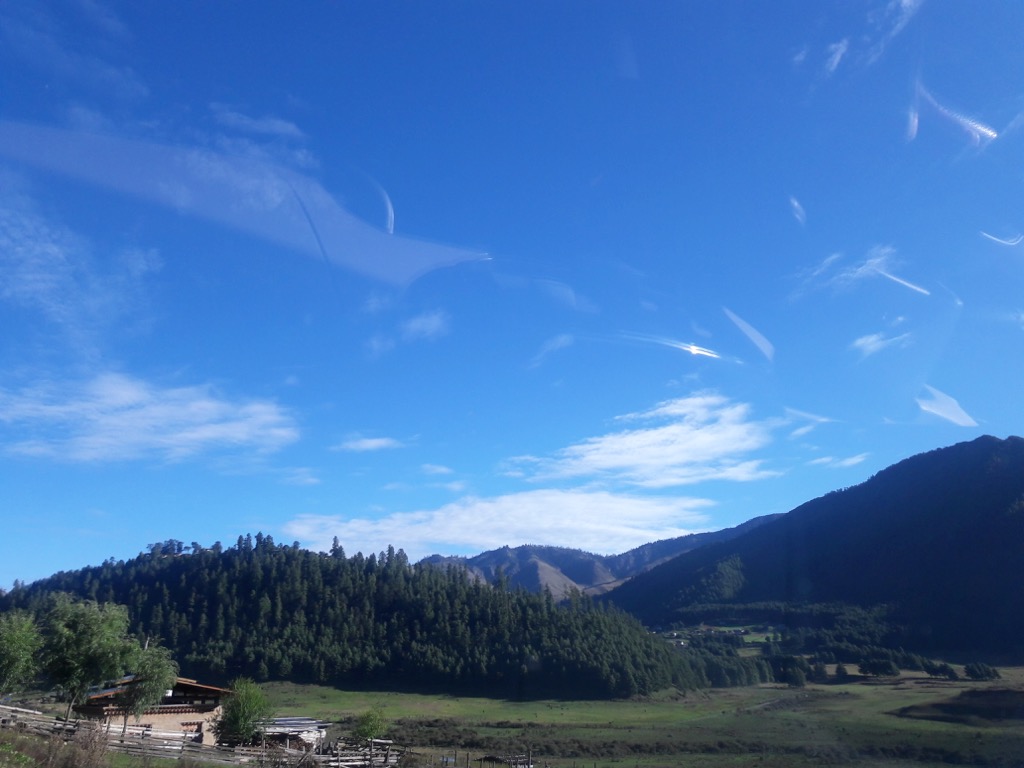 Commonly known as Arts & Crafts School or Painting School, the Institute offers a six-year course on the 13 traditional arts and crafts of Bhutan. On a visit, one can see students learning the various skills taught at the school.

In Bhutan, equal emphasis is given to both allopathic and traditional medicines. The rich herbal medicines made up from medicinal plants abundant in the Kingdom are prepared and dispensed here. The Institute is also a training school for traditional medicine practitioners. The complex is closed to visitors due to considerations of hygiene, but one can still walk around and view it from outside.

Also know as “fortress of the glorious religion”, it was initially built in 1641 and later rebuilt in its present form by King Jigme Dorji Wangchuk in 1965. The Dzong houses, main secretariat building which houses the throne room of His Majesty, the King of Bhutan. The National Assembly Hall is housed in a modern building on the other side of the river from the Dzong. During the warmer summer months, the monk body headed by His Holiness, the Je Khenpo, makes its home in the Dzong.

Located at a short drive from Thimphu city centre, visitors can get a good overview of the Thimphu valley from the Buddha point (Kuensel Phodrang). You can pay your obeisance and offer prayers to the Buddha, the largest statue in the country and then walk around and take a glimpse of the valley.

Visit the National Memorial Chorten, continuously circumambulated by the faithful, murmuring mantras and spinning their prayer wheels. Construction of this landmark was the idea of Bhutan’s third king, His Majesty Jigme Dorji Wangchuck (“the father of modern Bhutan”) who had wished to erect a monument to world peace and prosperity. Completed in 1974 after his untimely death, it serves both as a memorial to the Late King and as a monument to peace.

Then, visit the government-run Handicrafts Emporium and local crafts shops, to browse through examples of Bhutan’s fine traditional arts. Here you can buy hand-woven textiles, thangkha paintings, masks, ceramics, slate and wood carvings, jewellery, and other interesting items made from local materials.

The Takin is the national animal of Bhutan, and looks like a cross between a cow and a goat. Legend has it that the animal was created by the great Buddhist yogi, Drupa Kunley, and it can be found only in Bhutan and nearby areas. Taxonomists place the animal in a category of its own as it is not similar enough to any other animal to fit established categories.

Perched on a promontory, overlooking picturesque Trashichhoedzong and Golf course, it is the only nunnery in capital known as Zilukha Anim Dratsang, once belonged to the Drubthob (Realized one) Thang Thong Gyalpo often referred to as The King of the open field (In the early 15th century with his multiple talents he popularly became the Leonardo da Vinci of the Great Himalayas). You may interact here with some of the nuns who have devoted their life to spirituality and Buddhism

Overnight in a hotel in Thimphu

After your breakfast,you will be driving towards Paro.

You will be visiting the following sightseeing.

Built in 1644 by Zhabdrung Ngawang Namgyal , the first spiritual and temporal ruler of Bhutan, the Dzong houses the monastic body of Paro, the office of the Dzongda (district administrative head) and Thrimpon (judge) of Paro district. The approach to the Dzong is through a traditional covered bridge called Nemi Zam. A walk through the bridge, over a stone inlaid path, offers a good view of the architectural wonder of the Dzong as well as life around it. It is also the venue of Paro Tshechu, held once a year in the spring.

It is one of the oldest and most sacred shrines of the Kingdom dating back to 7th century (the other is Jambey Lhakahng in Bumthang). The lhakhang complex is composed of two temples. The first temple was built by Tibetan King, Songtsen Gampo in the 7th century and in 1968, H.M. Ashi Kesang, the Queen Mother of Bhutan, built the second temple in original pattern.

The beauty of Paro valley is embellished by cluster of quaint farm houses. Bhutanese farm houses are very colorful, decorative and traditionally built without the use of single nail. All houses follow the same architectural pattern. A visit to Farm House is very interesting and offers a good glimpse into the lifestyle of a farmer.

Built in 1525, this town temple was formed by Ngawang Chhogyel, one of the prince-abbots of Ralung in Tibet and an ancestor of the Shabdrung Ngawang Namgyal.

To the west of the road is Dungtse Lhakhang, a chorten-like temple. This unusual building was built in 1433 by the iron bridge builder Thangtong Gyalpo. It has three floors representing hell, earth and heaven and the paintings inside are said to be some of the best in Bhutan.

Taktsang is located on a high cliff towards the north of Paro town. It was first built in 1692, around the Taktsang Senge Samdup, a cave where Guru Padmasambhava is said to have meditated for three months in the 8th century. It is believed that Guru Rinpoche (Guru Padmasambhava) flew to this location from Khenpajong, Tibet on the back of a tigress and subdued a demon. He then performed meditation in one of the caves here and emerged in eight incarnated forms (manifestations) and blessed the place. Subsequently, the place came to be known as the “Tiger’s Nest”. Guru Padmasambhava is known for introducing Buddhism to Bhutan.