Besides the Thimphu Tsechu,Thimphu also celebrates a one day festival known as the Thimphu Drubchen which is also commonly known as Thimphu Dromchoe . The day long festival dates back to the 17th century. It was first introduced by Kuenga Gyeltshen in 1710, who was recognized as the reincarnation of Jampel Dorji, son of Zhabdrung Nawang Namgyel. The dromchoe is celebrated 3 days prior to the Thimphu Tshechu.

The Drubchen showcases the sacred dances dedicated to the chief protective deity of Bhutan, Palden Lhamo. Legend has it, that the deity Pelden Lhamo appeared before Kuenga Gyeltshen and performed the dances while he was in meditation. Based on these dances, Kuenga Gyaltshen initiated the Dromchoe.

During Thimphu Drubchen the mask dances known as cham and folk dances are performed to bless onlookers, to teach them the Buddhist dharma, to protect them from misfortune and to exorcise all evil. It is believed that merit is gained by attending these festivals. The dances invoke the deities to wipe out misfortunes, increase good luck and grant personal wishes. 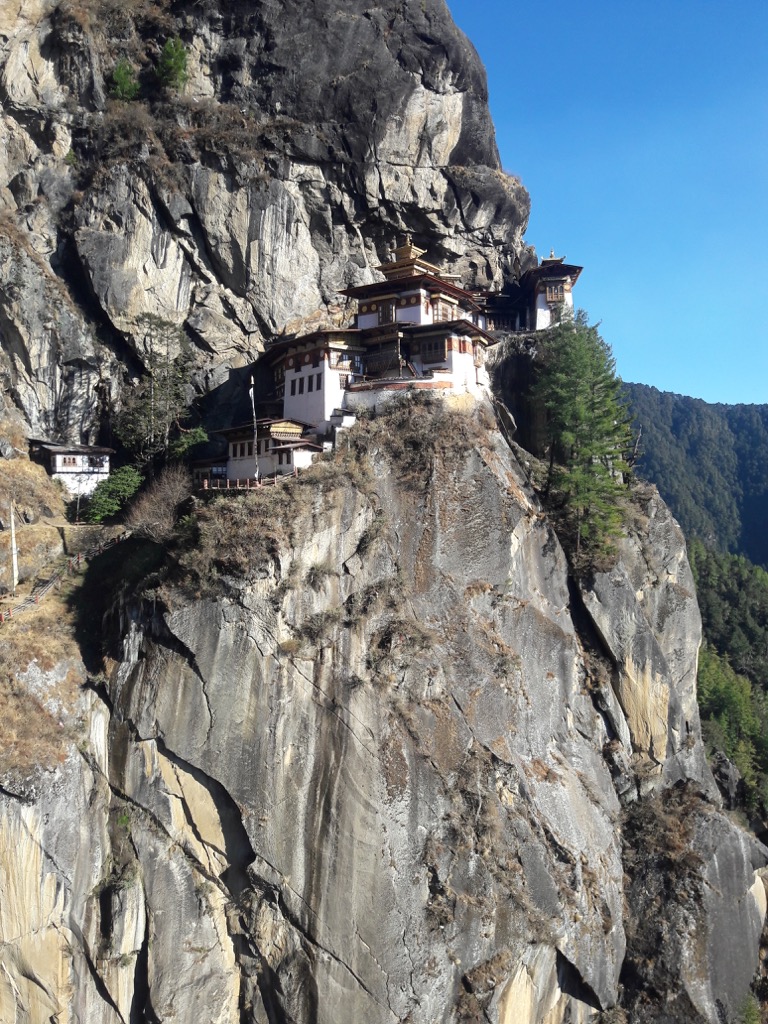 Apart from its religious implications, the festival is also an annual social gathering where people dress in their finest clothing and jewelleries. It brings you a closer contact with the local people and gives you an insight into the Bhutanese lives, beliefs and more.

After checking into your hotel and lunch visit the following:

After breakfast, you will travel to Punakha & Wangdue which will take you through Chunzom (confluence of Pachu- the river flowing through Paro valley & Wangchu –the river flowing through Thimphu valley). On the way, visit Tachog Lhakhang (temple) , this 14th century temple located on the base of a mountain across the Pa chu on the Paro-Thimphu highway, is a must visit temple in the Paro valley. Built by the great master architect Thangtong Gyalpo, the temple houses some unique statues. To get to the temple one may actually walk over the iron chains that spans over the Pa chu.

After crossing Chunzom, the drive will take you along the Wangchu upto Simtokha where road diversion leads you to Punakha/Wangdue through Dochula Pass (3,088m). In the clear spring sky, you can enjoy the panoramic view of the Himalayan Mountain ranges. At Dochula Pass you will see the beautiful 108 chortens (stupa) built on the hill by Ashi Dorji Wangmo Wangchuck (the Queen Mother of Bhutan) for the security and well being of His Majesty, the King of Bhutan. You will also visit Druk Wangyal Lhakhang (temple) .The temple was built to honor His Majesty Jigme Singye Wangchuck (the 4th King of Bhutan). The past and future appear to merge in the details of the temple that tells the story of a supreme warrior figure whose vision pierces the distant future.

After refreshment at Dochula Pass Resort you will continue your journey to Punakha. Punakha has been inextricably linked to some of the most momentous events in the Bhutanese history and deserves its reputation as one of the most beautiful and significant regions at the heart of Bhutanese culture. Punakha had served as the capital of Bhutan from 1637 till 1907 and the 1st National Assembly was held here. Punakha Dzong (fortress) is historically important and stands as the symbol for a unified Bhutan.

You will stop at Lobesa Village to visit the Devine Madman’s Monastery-Chimi Lhakhang, famously known for its fertility shrine, where one can receive a special fertility blessing. After lunch at Lobesa Village you will visit the Punakha Dzong, located on the island of the Pho – Chu (male river) and the Mochu (female river). The dzong was built in 1637 by Zhabdrung Ngawang Namgyal (high Drupa Kagyu lama who unified the warring valley kingdoms under a single rule in 16th century) to serve as the religious and administrative seat of the region. It was here that the dual system of government was introduced in the 17th century and in 1907, enthroned the first King Gongsar Ugyen Wangchuck. Damaged over the centuries by four catastrophic fires and an earthquake, the dzong has been fully restored in the recent years by the 4th King Jigme Singye Wangchuck. At the dzong, you can see the highest standards in woodwork. Also visit the massive Kuenray, the Coronation Hall of all Bhutanese kings, the Dzongchung at the entrance to the dzong and the cantilever bridge over the Mochu that has been recently renovated.

Dinner & overnight at a hotel in Punakha.

After breakfast, drive through upper Punakha valley passing through farmhouses and take a leisure walk through farmhouses and then through nature to the beautiful Khamsum Yuelley Namgyal Chorten temple built by the Queen Mother of Bhutan for peace and stability in this ever-changing world. This temple is situated on the hilltop overlooking the valley below. The leisurely walk up to the temple would take about 1 hour. Visit the temple and also enjoy the breathtaking view from there.

Then travel to Thimphu with lunch enroute.

On arrival at Thimphu check into your hotel and visit the following:

Centenary Farmers’ Market (open from Thu-Sun only): Most of the Thimphu’s population and many valley dwellers converge on the bustling weekend market, held by the side of Wangchu River. A wide range of foodstuffs and local arts and crafts are sold at the market, which runs from Friday afternoon till Sunday evening. A visit to the market provides great photo opportunities, as well as the chance to mingle with local people and perhaps buy souvenirs.

In the evening stroll around Thimphu downtown where you can visit local handicraft stores. 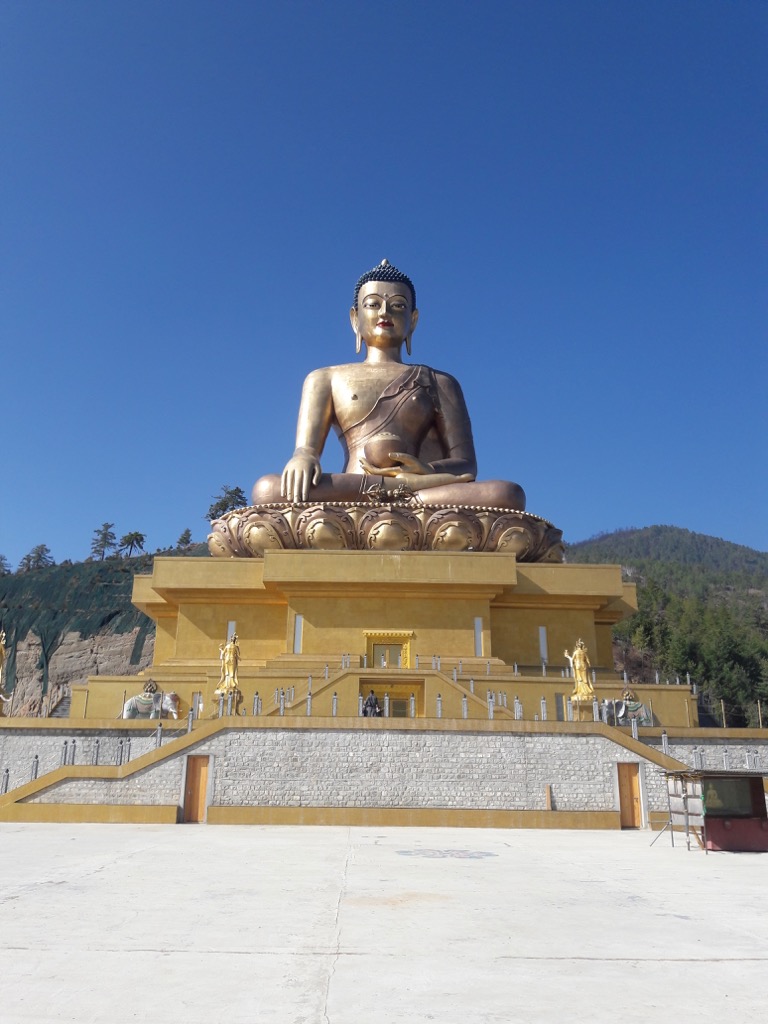 After breakfast you will go to witness Thimphu Dromchoe (Festival) which will be held at the Courtyard of Tashichhoedzong. The sacred dances would be performed which are dedicated to the chief protective deity of Bhutan, Palden Lhamo. Legend has it, that the deity Pelden Lhamo appeared before Kuenga Gyeltshen (chief abbot of Bhutan) and performed the dances while he was in meditation. Based on these dances, Kuenga Gyaltshen initiated the Dromchoe.

These religious dances are interspersed with folk songs and clowning. The festival is a magnificent cacophony of sound and colour and a photographer’s delight.

You also visit the interior of Tashichhoe Dzong, a fortress of the glorious religion. It was built in 1641 by Zhabdrung Ngawang Namgyel and was reconstructed into present structure by the late King, His majesty Jigme Dorji Wangchuck in the year 1962-1969. It houses the secretariat building, the throne room and the office of the king, and the central monk body.

After the festival you will visit the following:

After breakfast visit the following:

Bhutan Post Office Headquarters to get personalized Bhutanese postage stamps with your photo on them. You can bring along your favorite photo to put on the stamps and put these stamps on your postcard to send to your family and friends.

National Textile Museumwhich is a good place to see the art of traditional weaving being kept alive and preserved through exhibition and has a good collection of old textiles which are rich in colors and designs. You will also see people weaving with intricate designs.

National Institute of Traditional Medicine(outside only), where medicinal herbs are compounded and dispensed, and traditional medical practitioners trained.

The School of Traditional Painting of Arts and Craftswhere students undertake a six-year course on the 13 traditional arts and crafts of Bhutan.

Dinner & overnight at a hotel in Thimphu.

After breakfast,drive to Paro which takes about 1 hr and then hike up to Taktsang Monastery, also known as ‘Tiger’s Nest’. The walk up to the viewpoint will take about 1 – 1 ½ hrs depending on your fitness and from View Point you will enjoy a spectacular view of the monastery clinging to the side of the cliff. Stop for refreshment at the View Point Cafeteria. Then walk further up to the monastery which will take about 1 hour. It is said that in the 8th century Guru Rinpoche flew on the back of a tigress from eastern Bhutan to this place and meditated in a cave here for 3 months. The principal Lhakhang (monastery) of the present monastic complex dates from 1692. Taktsang was damaged severely by fire in 1998 but has now been fully restored to its former glory.After visiting the monastery, walk downhill back to the road on the way stop for lunch at the view point cafeteria and then walk further downhill to the road point. Then drive back to hotel.

On the way visit Kyichu temple,one of the 108 temples built in the 7th century by the Tibetan King Songsten Gampo. The story goes that a giant demon lay across the whole area of Tibet and the Himalayas and was preventing the spread of Buddhism. To overcome her, King Songtsen Gampo decided to build 108 temples, which would be placed on all the points of her body. Of these 108 temples, 12 were built in accordance with precise plans. Thus, it happened that in about the year AD 638 the temple of Jokhang in Lhasa was built over the very heart of the demon.

Dinner & overnight at a hotel in Paro.