The flight to Paro is one of the most spectacular mountain flights in the world, with a constantly changing panorama of some of the highest mountains on earth. Our Bhutan Travel Bureau representative will meet you at Paro airport exit doors following customs formalities. 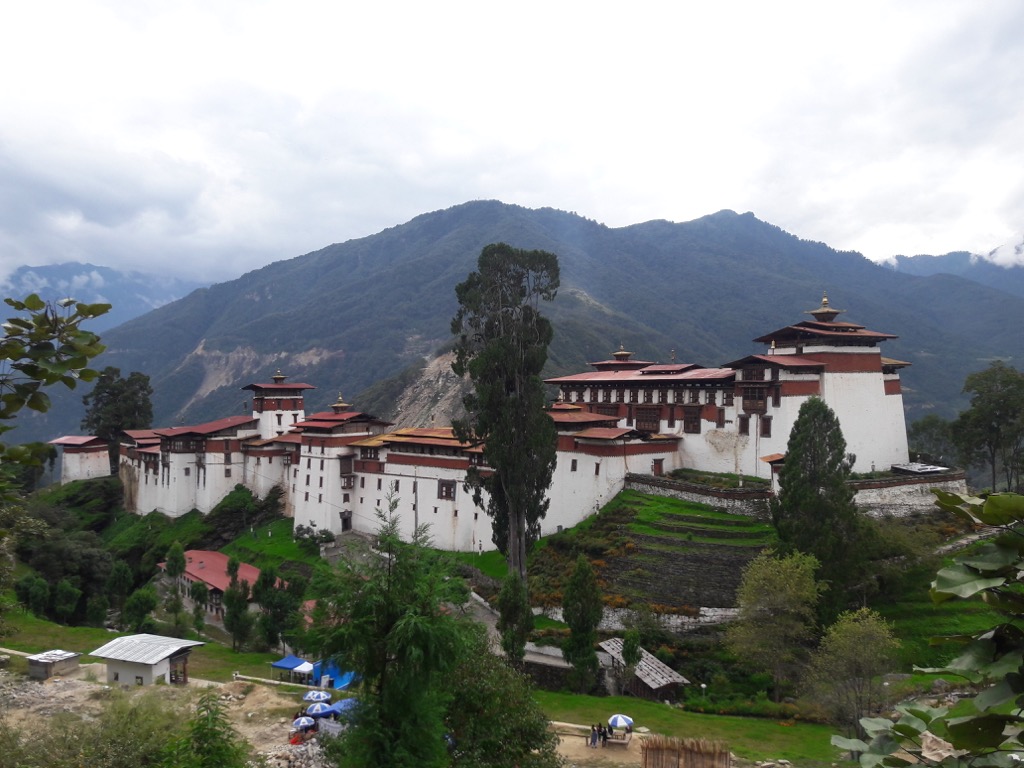 After lunch enjoy afternoon sightseeing around Paro, including a visit to the Ta Dzong Museum housing many religious relics, works of art and handicrafts offering a great orientation into Bhutan’s historical, cultural, and religious past. Next, visit the Rimpong Dzong to see the painting of the great saint Milarepa, considered as the master of meditation by the Bhutanese and believed to have attained enlightenment in a lifetime. Dzong’s are large monasteries and district administrative centres, which were once strategic forts. Afterwards, drive to the capital, Thimphu (1.5 hours) following the Pachu River. Before dinner at the hotel there will be an orientation on Bhutanese etiquette by your guide. Overnight at your hotel in Thimphu.

Once a rustic village sitting in a broad, fertile river valley, Thimphu is today the nation’s bustling capital. Enjoy a full day of sightseeing, including a visit to the National Memorial Chorten, completed by the Royal Queen Mother as a memorial stupa for the Third King who passed away in 1972. Continue on to 12th century Changangkha Temple and the Zilukha Nunnery.

If there is time, you may visit the nursing pen for the Takin, the national animal of Bhutan, and Tashichhodzong, ‘the fortress of the glorious religion’ housing some ministries, His Majesty’s secretariat, and the central monk body. Overnight at your hotel in Thimphu.

Drive over the Dochu-La pass (3,100 meters), which on a clear day offers an incredible view of Himalayan peaks before descending into balmy Punakha valley (about 3 hrs total driving time). The drive through the countryside affords a glimpse of everyday life in this most remote of Himalayan kingdoms. In the Dochu-La area there are vast Rhododendron forests that grow to tree size and bloom in late April/early May covering the mountains in a riot of glorious spring colour.

Punakha was the ancient capital of Bhutan. On arrival, visit Punakha Dzong, the “Palace of Great Happiness” built in 1637 by the Shabdrung, the ‘Unifier of Bhutan’. It is situated at the confluence of the Mo Chu and Pho Chu (Mother and Father Rivers) and is the winter headquarters of the Je Khenpo and hundreds of monks who move en masse from Thimphu to this warmer location. The three story main temple of the Punakha Dzong is a breathtaking example of traditional architecture with four intricately embossed entrance pillars crafted from cypress and decorated in gold and silver. It was here in 1907 that Bhutan’s first king was crowned.

After lunch, enjoy a walk to Chimi Lhakhang, temple of the Drukpa Kuenly who is also known as the Divine Madman. He inherited the Divine Madman title since he revolted against the orthodox Buddhism in his time. He taught the people that religion is an inner feeling and it’s not necessary that one should be an ordained monk. He is also considered a symbol of fertility and most childless couples go to his temple for blessing. Overnight at your hotel in Punakha/ Wangduephodrang.

This morning visit Wangduephodrang to explore this bustling market town and visit Wangduephodrang Dzong. Built in 1639 the strategically located Dzong is perched on a spur at the confluence of two rivers. Afterwards drive up a winding mountain road through oak and rhododendron forests, and over a high pass down into the wide and picturesque Phobjikha valley.

Phobjikha is one of Bhutan’s few glacial valleys, and chosen winter home of black necked cranes (November – March) migrating from the Tibetan plateau. The valley is one of the most beautiful in Bhutan. Visit Gangtey Goempa (Monastery), the only Nyingmapa monastery in western Bhutan and explore Phobjika Valley with time to view the Black-Necked Cranes. These great birds, beloved in Bhutan and known as Trung Trung, feed along the marshy Phobijikha valley bottomlands. There are said to be only 1600 of the birds in the world, of which about 400-500 come to Bhutan in November and stay until March. The beauty of the Cranes has given rise to many Myths, legends, Folktales and songs. Overnight at your hotel in Phobjikha.

Attend the Black-Necked Crane Festival. The festival features numerous cultural programs organized by the local community. These include students performing the crane dance and small stalls offering many colourful local items such as yak tail dusters, butter tea cups, turquoise and also different Bhutanese handicrafts for sale. This will also be ample time to view the Black Necked Cranes, visit the Information Centre and enjoy some of the many nature trails throughout the valley. Overnight at your hotel in Phobjikha. 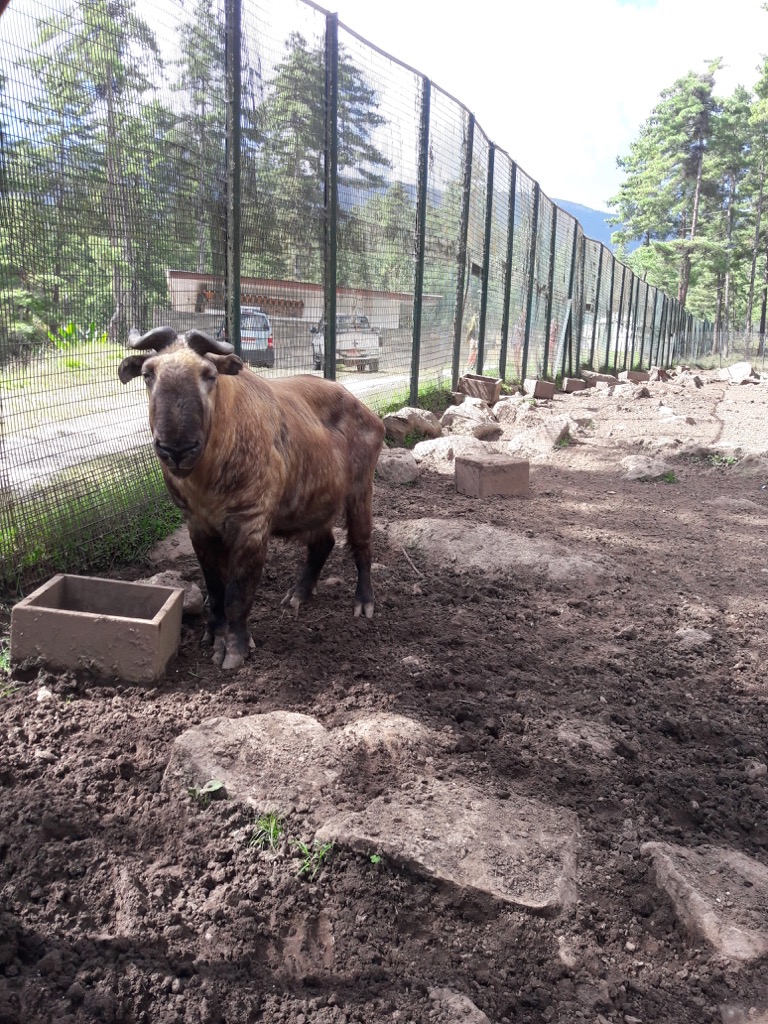 Drive to Trongsa (4 hrs) over Pele La pass (3,420m) on the Black Mountain range. Visit the beautiful Chendebji Chorten en route. It is built in a style unusual for Bhutan, with painted eyes facing the four directions. The Chorten was erected in the 18th century by a Tibetan lama to cover the remains of an evil spirit that was subdued at this spot. The imposing Trongsa Dzong can be viewed across a deep canyon to signal your approach to the town around a curving road. Trongsa is the ancestral home of Bhutan’s ruling dynasty. After lunch, visit Trongsa Dzong, a masterpiece of Bhutanese architecture. Trongsa is the largest Dzong in Bhutan and the location of where the institution of monarchy in Bhutan began. The foundations of Trongsa Dzong were laid in the 16th Century and there are now 22 temples in the complex. The view from the Dzong is spectacular and one can see across the impressive landscape for many miles. Also visit the Ta Dzong museum housing an incredible collection of historical artefacts of the Royal Family and a range of traditional armour.

Continue driving towards Bumthang (2.5 hrs), one the most spectacular valleys in Bhutan and also the spiritual and historical heartland of the country. The road winds steeply up to Yo Yutung La Pass (3,400m) before descending down through dense coniferous forest to Chummey valley. Enjoy a visit to the Chummey weavers’ workshop (at the beginning of the only straight road in Bhutan!). Here you can see example of Bumthang’s noted textiles. Some of the most popular are Mathra, deep wine and dark green plaid fine wool, nowadays made into colorful scarves, bags, blankets and sweaters.

Bumthang is home to some of Bhutan’s oldest Palaces, Buddhist temples and monasteries. The valley’s barley fields, apple groves and meadows lay below huge hills which climb up towards the Himalayan mountain wall separating Bhutan from Tibet. The beautiful architecture unique to Bhutan is evident in the many large farmhouses and temples. Bumthang is associated with Guru Rimpoche (Padmasambhava) and with Terton Pemalingpa. Overnight at your lodge in BumthaDay

Enjoy a day exploring some of the incredible sites of Bumthang, including Jakar Dzong (Dzong of the white Bird) and Tamshing Lhakhang, founded in 1501 by Terton Pemalingpa (founder of the Nyingmapa sect) and containing interesting and ancient Buddhist wall paintings. Pemalingpa’s heavy coat of nails is kept in the Vestibule and people are permitted to try it on. It is said that if they can walk around the inner sanctuary three times while wearing it, some of their sins will be forgiven. Also visit Kurjey Lhakhang, one of the most sacred places in the kingdom where Bhutan’s patron saint Guru Rimpoche meditated and Jambay Lhakhang, erected by the Tibetan king Songtsen Gampo in the 7th century. It dates back to the origins of Buddhism in Bhutan and is one of the Kingdoms oldest temples. Overnight at your lodge in Bumthang.

After breakfast drive to Punakha crossing over Kiki La Pass & Yo-Tong La Pass. After a short break in Trongsa continue your drive to Punakha and en-route stop at Chendibji Chorten for lunch. After lunch drive across Pele la pass. Overnight at your hotel in Punakha.

In the morning drive to Yabesa village and hike to through ricefields and up to Khamsum Yueley Namgyal Chorten, built by her majesty the queen Ashi Tshering Yangdon Wangchuk. Perched high on a hill on the bank of the river, the Chorten houses paintings belonging to Nyingmapa Traditions.

Take a picnic lunch on a picturesque riverside before exploring the Wangduephodrang Dzong. Built in 1639 the strategically located Dzong is perched on a spur at the confluence of two rivers.

Drive back to Thimphu where you will have an opportunity to visit handicraft and souvenir stores. Afterwards proceed to Paro. Overnight at your hotel in Paro. 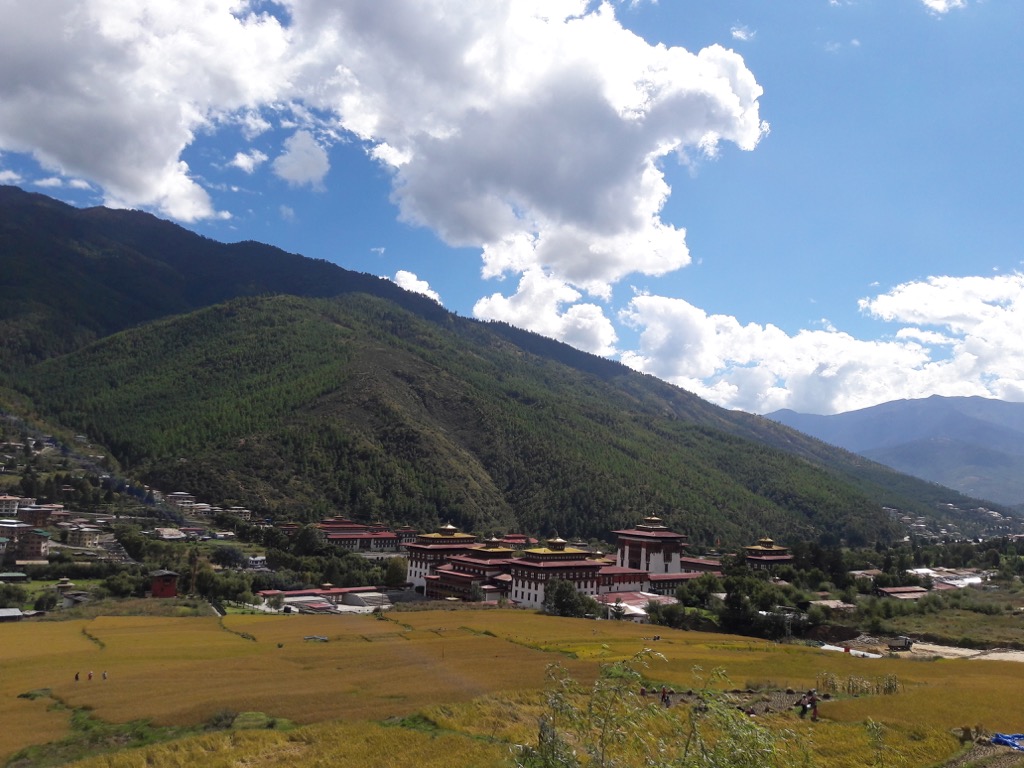 After breakfast hike to Taktsang Monastery. The trail is broad and the walk of approximately 2 hours uphill takes you almost a kilometre above the Paro valley floor (for those who cannot hike we will arrange a horse for transfer up to the viewing point). The view of Taktsang Monastery built on a sheer cliff face 900 metres above the valley floor is a spectacular sight. The Monastery is also an important pilgrim site for the Buddhists. The great Guru Rimpoche is said to have flown here on the back of a tigress when he brought the teachings of the Buddhist Dharma to Bhutan in the 8th Century. He then mediated in a cave there for three months where the monastery was later built. Nearby there is a teahouse where you can stop for refreshments.

In the afternoon drive to the ruins of the 17th Century Drukgyel Dzong, an historic monument built by the Shabdrung to commemorate his victory against invading Tibetans in 1644. In fine weather the towering peak of the sacred Mount Jomolhari (7314m) appears as a stunning backdrop. On the return drive to Paro, visit 7th Century Kyichu Lhakhang, one of the 108 temples constructed by the Tibetan king Songtsen Gampo.

Alternatively, day 6 could be spent on a day trip to the Haa Valley, one of the most picturesque districts in Bhutan. Reached via the beautiful Chelila Pass, Haa Valley is characterised by its surrounding rugged and mountainous terrain. Overnight at your hotel in Paro.

Breakfast in the hotel, then drive to the airport for flight to your onward destination.