Upon arrival you will be received by our guide who will help you settle into your comfortable car and will be heading to capital city Thimphu.

After lunch, drive to Drukgyel Dzong, a ruined fortress where Bhutanese warriors fought off Tibetan invaders centuries ago. The snowy dome of sacred Jhomolhari, “mountain goddess” can be seen in all her glory from the approach road to the Dzong. Along the way, see the 7th century Kyichu Lhakhang, one of the 108 temples built in the Himalayas by the Tibetan king, Songtsen Gampo. The building of this temple marks the introduction of Buddhism in Bhutan.In the evening stroll around the Paro town, free mingle with people and do shopping. Dinner and overnight at hotel in Paro 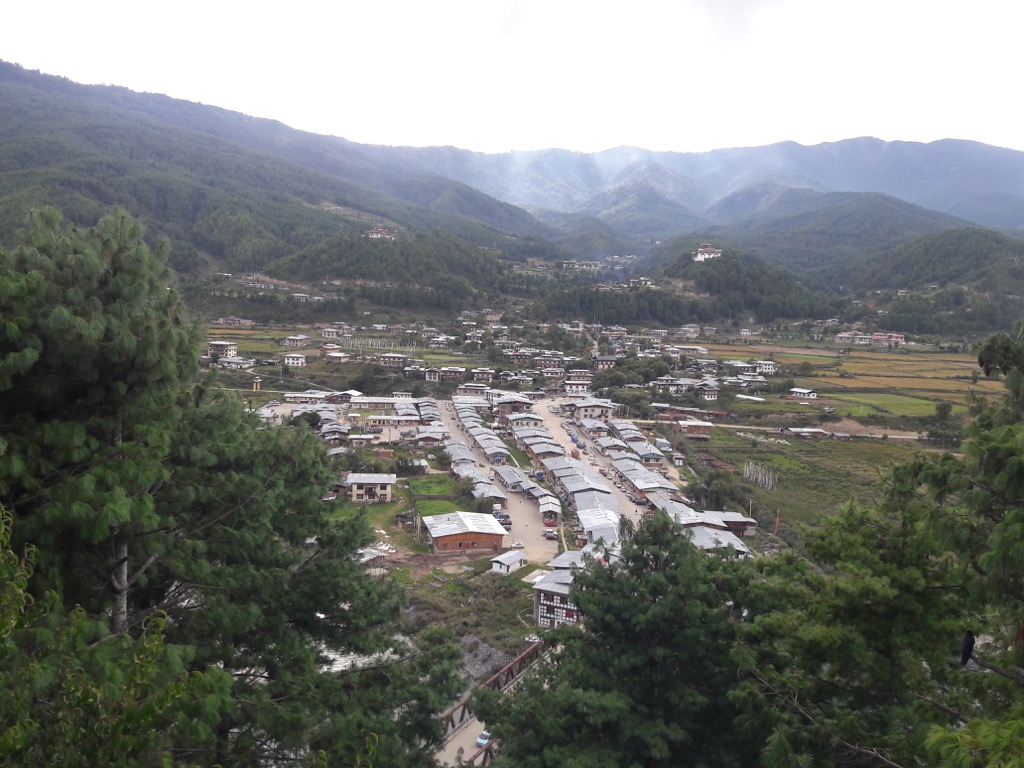 After early breakfast,you will drive towards Punakha via Dochula Pass.

Dochula pass is located on the way to Punakha from Thimphu. The pass is popular for tourists for its ideal location from where one can enjoy 360 degree of beautiful panoramic view of Himalaya mountain range, especially on clear winter days. The beauty of this place is further enhanced by the Druk Wangyal Chortens-108 stupa built by the eldest Queen Mother Her Majesty Ashi Dorji Wangmo Wangchuk. The pass is also popular spiritual place for both locals and tourists because of an important temple that is located on the crest of Dochula pass.

Her Majesty Ashi Dorji Wangmo Wangchuck has achieved a fine blend of history and mythology in the construction of The Druk Wangyal Lhakhang (temple) to honor His Majesty the fourth Druk Gyalpo, Jigme Singye Wangchuck. The past and future appear to merge in the details of the lhakhang (temple) that tells the story of a supreme warrior figure whose vision pierces the distant future.

Besides the spirituality of the place many Bhutanese families visit the pass during holidays and weekends to simply enjoy the scenery of the place with their pack lunch and hot tea. For the tourist the place is an ideal location to capture beautiful pictures of Himalaya mountain range during clear warm days.

Overnight in a hotel in Punakha.

After early breakfast, you will drive towards Bumthang via Pelela Pass

Pelela Pass at 3300m is an important dividing range that separates Western Bhutan from Central and Eastern Bhutan. Crossing this important Pass, one may enjoy the pastoral feeling as you drive deeper into the valley with meadows where sheep and yaks graze.

On your way to Bumthang,you will visit Trongsa Dzong

Built in 1648, it was the seat of power over central and eastern Bhutan. Both the first and second kings of Bhutan ruled the country from this ancient seat. All four kings were invested as Trongsa Penlop (“governor”) prior to ascending the throne. The dzong is a massive structure with many levels, sloping down the contours of the ridge on which it is built. Because of the dzong’s highly strategic position, on the only connecting route between east and west, the Trongsa Penlop was able to control effectively the whole of the central and eastern regions of the country from here.

En route to Trongsa is Chendebji Chorten, patterned on Kathmandu’s Swayambhunath Stupa, with eyes painted at the four cardinal points. It was built in the 18th century by Lama Zhida, to cover the remains of an evil spirit that was subdued at this spot.

Overnight in a hotel in Bumthang

After your breakfast,you will be visiting following sightseeing.

The Jakar Dzong or the “Castle of the White Bird” dominates the Chamkhar valley and overlooks the town. Constructed in 1549, by the Tibetan Lam Nagi Wangchuk, the Dzong played an important roleas the fortress of defence of the whole eastern Dzongkhags. It also became the seat of the first king of Bhutan. A special feature of the Dzong is the approximately fifty meter high Utse or the Central tower, which is distinct from most other Dzongs in Bhutan. The other unique feature of the Dzong is a sheltered passage, with two parallel walls, interconnected by fortified towers, which gave the population of the fortress access to water in the case of a siege. The protected water supply is still intact to this day.

This monastery was built in the 7th century by the Tibetan king, Songtsen Gampo. It is one of 108 monasteries which he built to subdue evil spirits in the Himalayan region. Its present architectural appearance dates from the early 20th century.

Located further along the valley, Kurje Lhakhang comprises three temples. The one on the right was built in 1652 against the rock face where Guru Padmasambhava meditated in the 8th century. The middle temple is built on the site of a cave containing a rock with the imprint of the Guru’s body, and is therefore considered to be the most holy. The temple on the left was built in the 1990s by H.M. Ashi Kesang Wangmo Wangchuck, Grand-Queen Mother. These three temples are surrounded by a 108 chorten wall.

Located across the river from Kurje Lhakhang, this temple was founded in 1501 by Terton Pema Lingpa, a re-incarnation of Guru Padmasambhava. There are very old religious paintings around the inner walls of the temple, which was restored at the end of the 19th century.

Located above the main town, about 3 km from Chamkhar town, the monastery was founded by Namkhai Nyingpo Rinpoche in 1984 who was recognized at a very young age by H.H. the 14th Dalai Lama and H.H. 16th Karmapa as the reincarnation of a Tibetan lama whose spiritual lineage dates back to the nearest disciples of the great 9th century master. Since then the monastery has developed considerably with increase in number of monks to almost four hundred. The monastey has become part of an extensive effort to preserve and revitalize Tibetan culture. The monks regular curriculum include reading, memorizing the daily prayers, learning dharma dances, drawing mandalas, learning the melodies of sacred rituals, learning the use of ceremonial instruments and the art of making sacrificial objects, grammer, poerty, karika along with the basics of contemplation and instruction on the different stages of tantra.

Overnight in a hotel in Bumthang.

After your breakfast,you will be driving towards Gangtey.

Gangtey goemba was founded by Pema Trinley, the grand son of Pema Lingpa, the famous Nyingmapa saint of Bhutan. In 1613, Pema Trinley establish the monastery and became the first Gangtey Tulku. The religious traditions of Pema Lingpa still taught there. The second Tulku, Tenzin Legpa Dondrup (1645 to 1726), enhanced the size of Gangtey while keeping up good relations with Drukpas, and rebuilt the monastery in the form of a Dzong.

Situated on the edge of the forest and wetland along the main road of Phobjikha valley, the black-necked crane information Centre has an observation room equipped with high power telescope and spotting scopes for catching the best view of the cranes. The centre also offers display information that outline the natural and cultural history of the area. There is a small gift shop, which sells handicrafts produced by the local people.

Overnight in a hotel in Gangtey 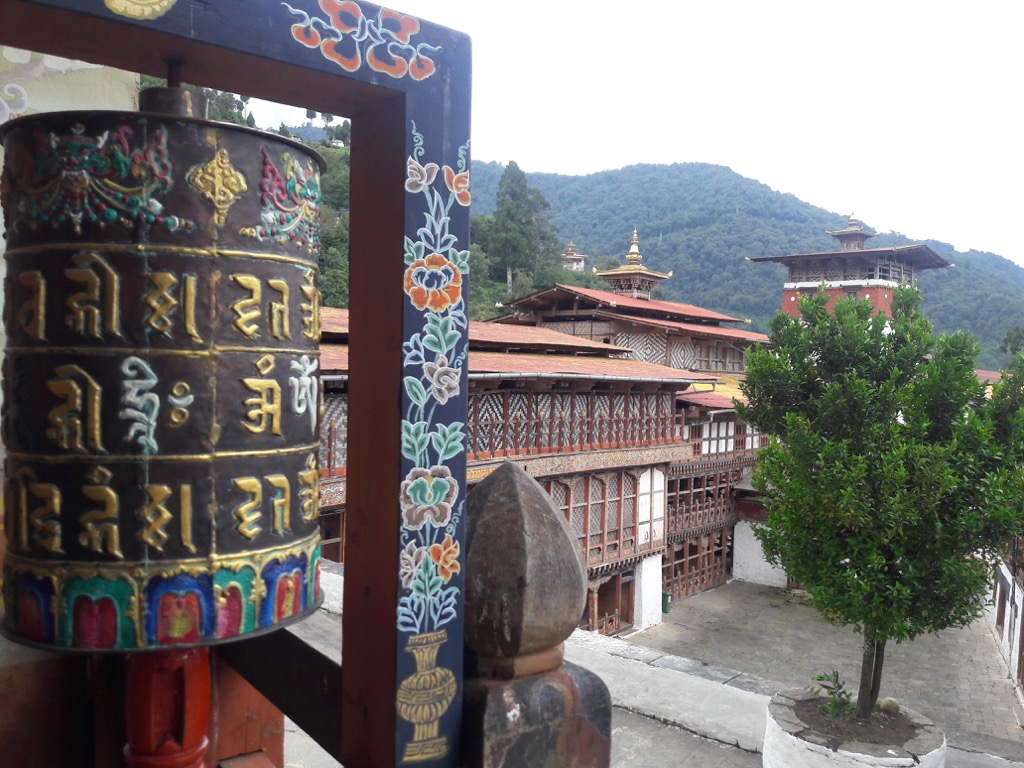 After your breakfast,you will be driving towards Paro.

Built in 1646 by Shabdrung Ngawang Namgyal , the first spiritual and temporal ruler of Bhutan, the Dzong houses the monastic body of Paro, the office of the Dzongda (district administrative head) and Thrimpon (judge) of Paro district. The approach to the Dzong is through a traditional covered bridge called Nemi Zam. A walk through the bridge, over a stone inlaid path, offers a good view of the architectural wonder of the Dzong as well as life around it. It is also the venue of Paro Tshechu, held once a year in the spring.

It is one of the oldest and most sacred shrines of the Kingdom dating back to 7th century (the other is Jambey Lhakahng in Bumthang). The lhakhang complex is composed of two temples. The first temple was built by Tibetan King, Songtsen Gampo in the 7th century and in 1968, H.M. Ashi Kesang, the Queen Mother of Bhutan, built the second temple in original pattern.

The beauty of Paro valley is embellished by cluster of quaint farm houses. Bhutanese farm houses are very colorful, decorative and traditionally built without the use of single nail. All houses follow the same architectural pattern. A visit to Farm House is very interesting and offers a good glimpse into the lifestyle of a farmer.

Built in 1525, this town temple was formed by Ngawang Chhogyel, one of the prince-abbots of Ralung in Tibet and an ancestor of the Shabdrung Ngawang Namgyal.

To the west of the road is Dungtse Lhakhang, a chorten-like temple. This unusual building was built in 1433 by the iron bridge builder Thangtong Gyalpo. It has three floors representing hell, earth and heaven and the paintings inside are said to be some of the best in Bhutan.

After your breakfast,you will be hiking Tigers Nest.

Tiger’s Nest is located on a high cliff towards the north of Paro town. It was first built in 1692, around the Taktsang Senge Samdup, a cave where Guru Padmasambhava is said to have meditated for three months in the 8th century. It is believed that Guru Rinpoche (Guru Padmasambhava) flew to this location from Khenpajong, Tibet on the back of a tigress and subdued a demon. He then performed meditation in one of the caves here and emerged in eight incarnated forms (manifestations) and blessed the place. Subsequently, the place came to be known as the “Tiger’s Nest”. Guru Padmasambhava is known for introducing Buddhism to Bhutan.